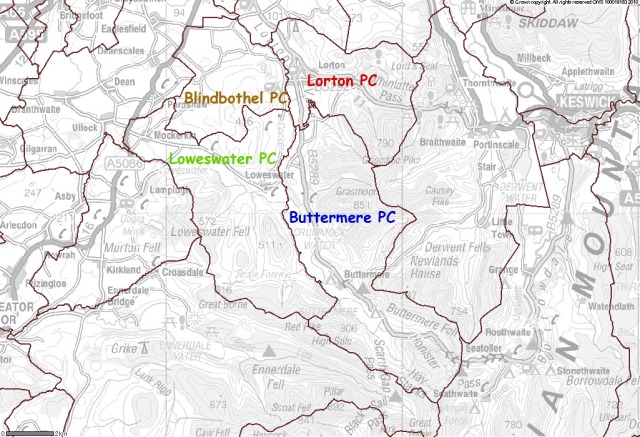 Parish (or Town) councils were set up under the 1972 Local Government Act and operate under the umbrella of the Borough or District Council (in our case, Allerdale Borough Council). They represent the views of and are accountable to electors within the Parish. In Cumbria, there are 269 parishes and those within Allerdale can be seen here. All four parishes lie within the Crummock Ward of the Borough Council and the local Councillor is Joe Milburn. See here for an accurate map of the Crummock Ward boundary. Further information can be obtained at the website of the Cumbria Association of Local Councils (CALC).

According to the 2001 census, there were 315 households across the four parishes with a total population of 734. There were significantly more women (386) than men (348) with an average age of about 45.

Farming and Family Life across the four parishes
Farming and associated trades were the biggest employer in bygone days before mechanisation. After the Second World War, farming practices began to change, with the demise of horses for pulling machinery, and the advent of the tractor. Mixed farming had been the tradition. Shorthorns were the local breed of cattle in the area. They were short rather ugly looking animals, with crumpled horns. Armaside Farm on the western edge of Lorton Parish was the first farm to have a Friesian herd. Many farmers were sceptical, but it was not long before Friesians began to replace the Shorthorns all over the district. 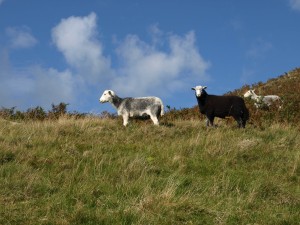 The traditional sheep on the fells are hefted, or heafed. These flocks have been bred over hundreds of years to be “territorial”. Herdwicks and Swaledales are mostly seen on the fells. “Herdwick” is derived from ‘Herdvyck’ meaning sheep pasture, and it has been suggested that they arrived with the Norse people.

During the Second World War, prisoners of war from the Moota prisoner of war camp on the road from Cockermouth towards Carlisle worked on various farms. They were transported to and fro, being dropped off at the farms each morning and collected again in the evenings.

The typical farmer’s wife had a very busy life. It had to be well organised, not only looking after the family but also farm hands might well be living in the house too. They usually were not allowed to use the family bathroom, but washed in the kitchen sink and used an outside toilet. Every day of the week was assigned a specific task – wash day, baking day, ironing day, cleaning day etc. Monday was Auction Day when the farmer would go into Cockermouth to do his business. His wife might accompany him, particularly if they had a car, to do some shopping. On Sundays the farmer would finish all his work, (‘do up’, being the local expression) by dinner time in the middle of the day, and the afternoon was likely to be the only time for some relaxation. In the evenings Evensong was held at a time to suit those farmers who wished to go to Church.

During the period after the end of the Second World War, various delivery vans delivered weekly to the farms in the district. Supplies included groceries, fish, and bread. One of the baker’s vans also collected and delivered shoes and boots which required mending. A Cockermouth grocer would come out on a regular visit one afternoon once a week to take an order, and the goods would be delivered a day or two later. A library van visited the villages once a week. There were post offices in the villages of Buttermere, Lorton and Loweswater, and a young lad would usually be sent on his bicycle to deliver any telegrams that had arrived. The Doctor would come and visit at home when required. If a farmer was working late harvesting or hay making and, for example, had the misfortune to get a thorn in his eye late in the evening, he could pop round to the District Nurse in Lorton and have it dealt with immediately.

Mixed farming was the practice throughout the parishes, including the growing of oats and barley, but dairy farming created the regular income for a large number of farmers once the Milk Marketing board was established in 1933. The herds over time increased in size as milking parlours replaced the traditional byres, enabling more cows to be milked by one person.

Since the 1960s a large number of individual farms in the four parishes have disappeared and farm houses have been sold off separately from the land that was farmed. As farming has decreased tourism has taken over, with many farm houses, cottages and farm buildings converted into holiday accommodation. The parishes were not fully electrified until well after the Second World War. Nor did everyone have a telephone in the 1950s. To begin with households had to share the telephone, and this could cause difficulties if one person in one house spent too long on the phone preventing the other household from making an urgent call.

Milk quotas were introduced in 1984 to restrain farmers from producing too much milk. The consequence was that a large number of farmers in the area gave up their dairy herds. In 2001 foot and mouth disease hit the western side of Lorton civil parish where Armaside Farm was affected. As a consequence several farms in the Lorton area had to have their animals slaughtered. Miraculously the disease was prevented from spreading up the valley into the other parishes and onto the fells.

Favourite local sports in the past included cock fighting, wrestling, fell running, hound trails, hunting, and sheepdog trials. Fell running was born out of the birth of tourism in the Lake District from the early 1800s, when mountain guides were needed. Mountain guides began to race each other up and down the fells when there was a lull in employment, and by the 1920s fell running was a very popular sport.

The Melbreak Foxhounds
Hunting with foot packs was a part of country life in the district. Hunting served an important service to farmers in the four parishes, keeping some control over foxes which otherwise prey on lambs, hens, ducks etc. At the same time hunting gave pleasure to the followers on foot and those who watched a very traditional country activity. The Melbreak Foxhounds began in about 1870 and became a subscription pack in 1917. Jonathan Banks had been Huntsman for many years, before Dick Head took over. The hounds were kennelled for many years at Banks’ farm at High Park in Loweswater at the foot of Melbreak. Banks not only hunted the Melbreak Pack for many seasons but also hunted with the Egremont Otter hounds. He was almost certainly responsible for the excellent working terriers serving with the Melbreak Hunt. The Egremont strains were “typey stock”. It is said that the Melbreak hunt had classy red, hard coated terriers as early as the 19th century. The Melbreak Pack stayed at High Park until 1926 when Miller Place (below Dodd Fell) in the parish of Buttermere, was bought, and made into kennels. A tied cottage was provided for the huntsman. Willie Irving was the huntsman from 1926 until 1951, and on his retirement Harry Hardisty took over, followed by Richard (“Pritch”) Bland.

Each village had its own annual Hunt Ball to raise funds for the upkeep of the Melbreak Pack. The hounds would stay on a farm in the village where the Hunt Ball was taking place for the week beforehand. When the Pack was due to stay for its annual week at Cockermouth Castle, children from Cockermouth would walk out of the town to meet the hounds, while they were making their way to the Castle.

Huntsmen and hounds walked everywhere in the early days. Many long hours were spent walking from the kennels to the various villages in the district, and of course miles and miles were covered by hunters over the fells after the chase. As time went on, Frank Coates began to transport the hounds in his cattle wagon to the furthest villages when they were going to stay there for a few days. Over the years, as traffic increased, it became impossible to walk the roads with a pack of hounds, and nowadays they are transported everywhere in a van.

Hunting began in September and continued until spring, after which the Melbreak Pack were on call to farmers whose lambs were being harassed by foxes until May. At the end of the season hounds would return to the farms from where they had come as puppies. Once puppies are old enough to hunt they would go into the kennels for the season. The traditional pack of hounds consisted of twelve couples. The huntsman would have to find alternative work during the summer, until hunting together with his wages resumed again in September.

Drag hunting with hounds or trailing has taken the place of the traditional hunting of foxes. Hound trailing was infact one of the earliest sports in Cumbria. It began when owners of hounds needed to keep their hounds fit for the season by laying a pre-set scented trail for the hounds to follow.

For more info about hound trailing, see the website of the Hound Trailing Association here.